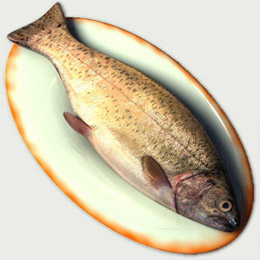 What is the safest fish to eat? Which fish have the least mercury?

American's eat lots of fish. In fact, We're second only to China in total seafood consumption. Fortunately, most fish are rich in protein, vitamins, minerals and essential fatty acids while being low in calories and saturated fats. So, they provide excellent nutrition for our brain, heart and overall health. (Think you can guess the most-eaten type of seafood in the U.S.? Take our quiz below.)

Unfortunately, however, fish also have a tendency to contain mercury, PCBs, DDT, dioxins and pesticides that are present in the waters in which they live. When we eat the fish, those unhealthy contaminants are then passed up the food chain to us! And since our bodies are inefficient at eliminating many of these toxins, the chemicals tend to build up in us over time which can result in central nervous system, liver and immune problems for adults as well as slow childhood development, suppressed immunity and learning disabilities in children (especially under age 6). Unborn babies whose mothers were exposed are also especially vulnerable.

How to enjoy the health benefits of eating fish AND minimize exposure to the hazardous pollutants:

How to cook fish

As a general rule for baking, steaming, grilling and baking, allow 10 minutes of cooking time per inch of thickness if the fish is unfrozen; allow 20 minutes per inch if it's frozen. Reduce the time for microwaving and frying.

Fish is done when it's internal temperature reaches 145° F (using a food thermometer) or when the flesh is opaque (not clear and shiny) and flakes easily with a fork.

Tip: Check out our recipe for Health Fish Tacos.

1. Choose fish that tend to be low in contaminants.

The Washington State Department of Health offers an excellent, printable Healthy Fish Guide. It organizes the most commonly eaten fish into those that (A) contain the least and highest amounts of toxins, (B) are the best sources of healthy, omega-3 fatty acids, and (C) are most sustainable and whose capture/harvest causes the least impact on the environment.

Trout and wild-caught, Pacific Salmon as well as small fish, lower in the food chain, such as Anchovies, Herring, Canned Mackerel, Oysters and Sardines are on the SAFE list. Large fish, which prey on smaller species and accumulate a high levels of contaminants should be avoided. Examples on the AVOID list include Marlin, Shark, Swordfish, Orange Roughy and Ahi Tuna steaks. Somewhat surprisingly, canned, light tuna is on the SAFE list since it regularly has just 1/3 the mercury level of the more expensive canned, Albacore or white tuna, which is a fish to AVOID.

Again, the Washington State Department of Health comes to the rescue with a helpful Reduce Exposure to Contaminants in Fish checklist. It clearly shows how to trim away the skin and fats (which collect up to 50% of the PCBs and some other contaminants) so that you retain the most healthy fillet meat. The checklist also advises that you poach, bake, grill/broil or microwave your fish, letting the fats drip off during cooking. Do not reuse the fat in gravy or sauces.

For tips on what to look for when buying fish, visit the FDA's Food Facts.

One final note: While industrial burning of fossil fuels and agricultural runoff are responsible for many of the contaminants that end up in our waterways, households that carelessly dump toxic wastes into the garbage, flush them down the sink or toilet or discard oil, fertilizer, trash or animal waste into storm drains also contribute to the problem.

Join in our discussions:
+ Add your comment for Healthiest Fish to Eat
Showing comment(s)
lauren
July 25, 2013
don't you feel sorry for the fish you are eating they have done nothing wrong
▲ jump to top of article
Other Popular Posts

Subscribe to our RSS
Information provided here should not be relied on to diagnose, treat, cure or prevent any condition, disease or illness. Please consult with your physician or health care professional for guidance on any health concern. AlabamaHealth.com is a commercial website and is not affiliated with any government agency, university, or private medical center. COMPENSATION DISCLOSURE: This site may be compensated for products promoted here. Read our Privacy Policy and Terms of Use.